Georgia College & State University (GCSU)—a four-year institution—aims to produce graduates who are well prepared for careers or advanced study and who are instilled with exceptional qualities of mind and character. These include an inquisitive, analytical mind; respect for human diversity and individuality; a sense of civic and global responsibility; sound ethical principles; effective writing, speaking, and quantitative skills; and a healthy lifestyle.

Georgia College remains committed to being an integral part of the University System of Georgia’s Complete College Georgia (CCG) initiative for creating a more educated state. The CCG Campus Completion Plan initially developed by Georgia College in 2012 was built around its mission (see Georgia College Mission Statement) as Georgia’s designated public liberal arts university where excellence, engagement, and innovation are essential components of an educational experience that according to its mission “supports the needs of the region and creates pathways to individual success and personal fulfillment.” This sentiment remains today as Georgia College continues to refine and improve upon the CCG goals, strategies, and objectives previously developed.

“As Georgia’s public liberal arts university, Georgia College offers undergraduate programs of study to talented and motivated students in a residential college setting.  Georgia College also provides, at multiple locations, graduate and professional studies that support the needs of the region and create pathways to individual success and personal fulfillment.  Its academically engaging, student-centered programs often take learning beyond the traditional classroom and develop the intellectual, professional, and civic skills and dispositions that enable graduates to thrive in an information-intensive and diverse global society.  Through its teaching, research, and service, Georgia College enriches the lives of students and their local and global communities.”

Georgia College’s enrollment has been stable over the past nine years.  First-time freshman enrollment (see Graph 1:  First-time, Full-time Students) was initially capped between 2007 and 2010 to support our mission but has experienced steady increases since 2011.  Overall undergraduate enrollment also experienced moderate increases from 2006 to 2010, a small decline in Fall 2012, followed by a steady increase to its present level in 2014 (see Graph 2:  Fall Undergraduate Enrollment). Further enrollment growth at Georgia College is planned for graduate programs while maintaining undergraduate enrollment at its current levels.

Georgia College’s four-year graduation rate (see Graph 5: Graduation Rates) has also seen a steady increase and is cause for optimism that many of our CCG goals and strategies might indeed be effective.

The diversity among our student body is illustrated in Graph 6: First–time Students by Race and Ethnicity, and reviewers will note the trend line for minority students, particularly African-American and Hispanic.  The percentage of African-American students increased modestly from 2013 to 2014 while the percentage of Hispanic students remained steady.  While Georgia College continues to struggle with attracting students from diverse populations, much attention has been placed on this initiative as a result of the recently authored campus diversity plan in 2014 and the continued successes of the Georgia College Early College Program as highlighted in this report. As stated in 2014, collectively, all efforts to date have the goal of increasing diversity across campus and, subsequently, retention and graduation rates of these student groups.

The selected strategies highlighted in this report support Georgia College’s mission by increasing completion rates of our students, thus “developing their intellectual, professional and civic skills, and dispositions that will enable them to thrive in an information-intensive and diverse society” (See Mission Statement on page 3). Georgia College continues to be committed to its designated public liberal arts mission and the purposeful execution of activities designed to improve retention and graduation rates of its students. 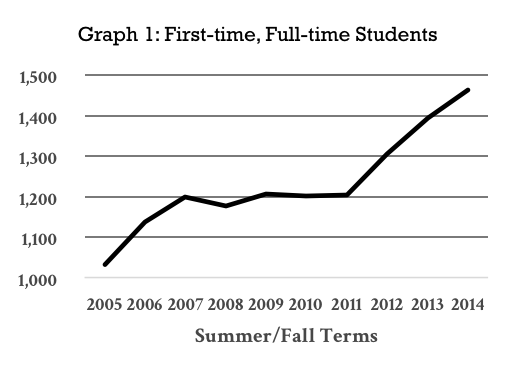 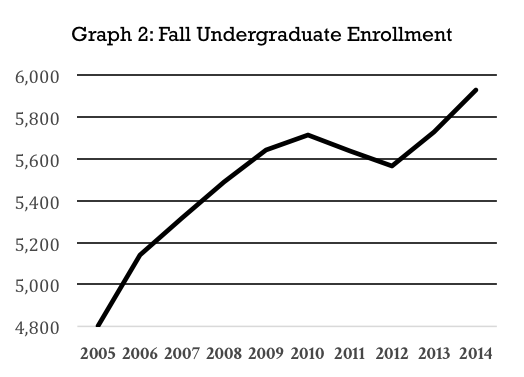 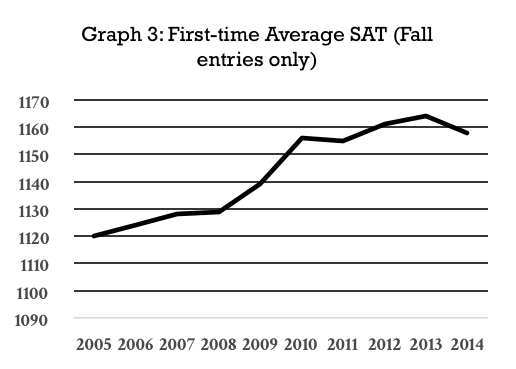 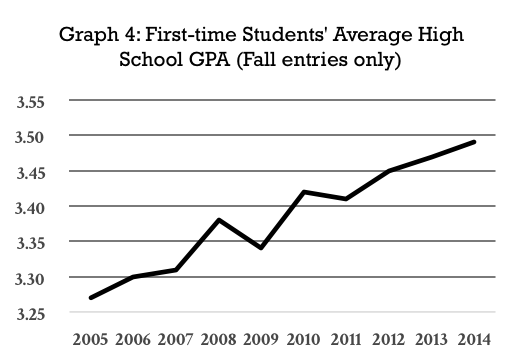 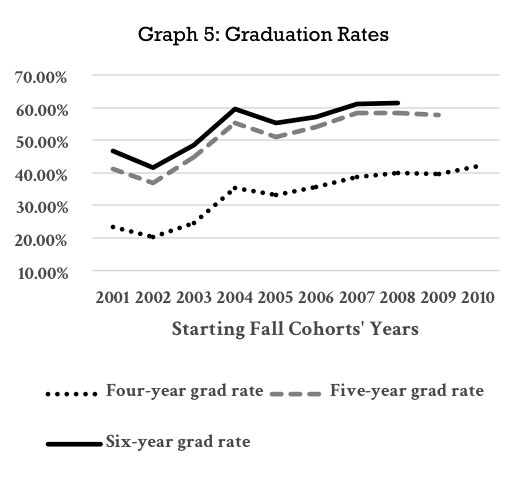 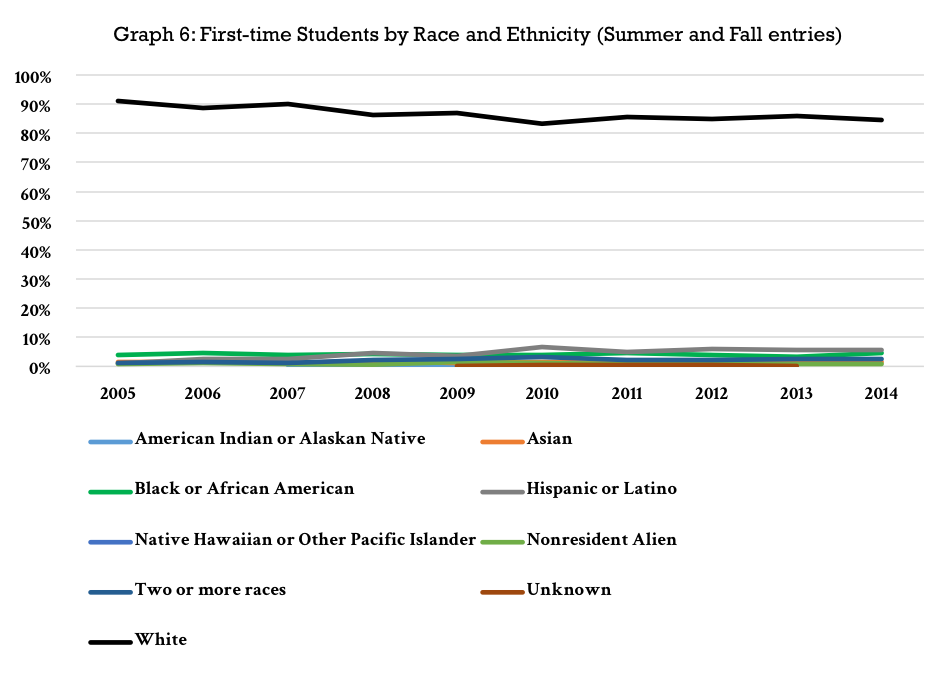 What strategies and activities have been most successful?

As evidenced by data provided in this report, the Math Emporium model appears to have stabilized and continues to be one of Georgia College’s greatest instructional delivery successes. The Mathematics Department has worked diligently to develop a model that has led to increases in students’ performance. Given the success, the department would like to enlarge the scope of the course design sequence and offer Math Modeling as well as College Algebra via the Emporium.

The use of SSC as a predictive tool in identifying students at academic risk allowed for advisor intervention resulting in a 65% decrease in the number of at-risk students. In addition, for the same period, 65.3% of students who worked with new professional advisors to switch majors did so according to SSC data (N=2,699 students).

What have been least effective?

Data presented on page six identified a decline in students graduating from GCEC between 2014 and 2015 and, subsequently, the number of students choosing to enroll at Georgia College. While there was a slight dip in college credits earned from 2012 to 2013, the number increased in 2014 with a range of 15-37 credits but then declined in 2015 to 9-32. However, the 2015 results were higher than in 2012 and 2013. GCEC administrators are cautiously optimistic that 2016 will see a return to the 2014 levels.

The number of students participating in dual enrollment showed a decrease in Fall 2014. Results of surveys indicate the primary barrier is one of financial resources. However, the restructuring of the dual enrollment program into Move On When Ready (MOWR) provides funding for essentially all costs for families, therefore, removing this barrier. This change is effective Fall 2015.

Has your institution made adjustments to completion activities over the past three years?

If so please explain why.

Since the arrival of the new Associate Provost and Director of Student Success in January 2015, there has been a renewed focus in terms of reviewing measures in place since the advent of CCG and identifying areas in need of a enhancement to improve retention and graduation rates of Georgia College students. As a result of these discussions, the following four areas have been targeted for implementation:

Modifications made since 2012 continue to have a positive effect on student success, and no additional changes were made in AY 14-15. The Department of Mathematics continues to monitor all aspects of the Emporium Model’s delivery.