The Board of Regents of the University System of Georgia was created in 1931 as a part of a reorganization of Georgia's state government. With this act, public higher education in Georgia was unified for the first time under a single governing and management authority. The governor appoints members of the Board to a seven year term and regents may be reappointed to subsequent terms by a sitting governor. Regents donate their time and expertise to serve the state through their governance of the University System of Georgia – the position is a voluntary one without financial remuneration.

A composite report featuring updates from each USG institution and the System Office is available to download.  Find it here (6.4MB)

In 2011, Governor Nathan Deal announced the Complete College Georgia initiative, a collaborative effort among Georgia’s K-12 schools, public colleges, universities and technical colleges, and the private sector to take concrete steps to improve college access and completion in the state.  Framed on a set of high impact strategies organized around nine goals, the initiative builds on national research and local activities to support student success at all levels.  The overarching goal is to graduate an additional 250,000 Georgia students with high-quality degrees or certificates by 2025 in order to reach projections of employment readiness. In 2011, each institution in the University System of Georgia and Technical College System of Georgia created action plans on the policies and procedures that they could implement to have the greatest impact on college completion within their institutional mission and context.

Through the leadership of Chancellor Henry M. “Hank” Huckaby, Complete College Georgia (CCG) has developed into a framework for focusing institutional attention on what matters most: helping Georgia’s students succeed.  Institutions have adopted, adapted, and promoted a wide range of strategies to suit their local settings. More importantly, the work of promoting student success has become much more broadly shared on campus and better understood across the units of institutions.  Forging partnerships among functional areas and fostering understandings of how the various elements of a college or university come together for students have helped to support Georgia’s orientation toward building a 21st century workforce.

Two renowned Hispanic/Latino organizations, Hispanic Association of Colleges and Universities (HACU) and Excelencia in Education identified the University System of Georgia as “the only system-wide approach in the United States designed explicitly and intentionally to increase and assure Latino college completion.” 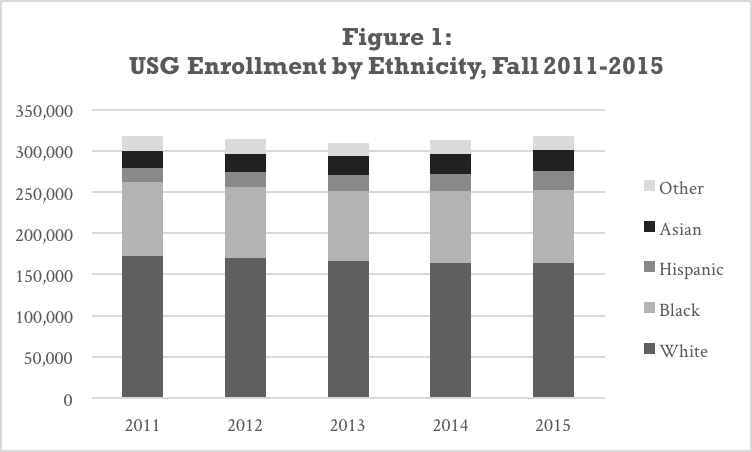 Student preparation for college remains a challenge for college completion in Georgia.  While the Georgia Department of Education has made tremendous efforts to improve the preparation of K-12 graduates, nearly one in five students admitted to a USG institution required learning support in 2015. Learning support includes any activities beyond a college program's prescribed content that contributes to individual students' attendance, retention, learning, and achievement.

Although this number is down considerably from 2010, when the figure was 30 percent, the number of students who enter college requiring support poses significant challenges for our institutions.  The overwhelming majority of USG students enrolled in learning support—80 percent—are being served by one of the state’s 13 state colleges.  Even though the number of students has declined, in large part due to changes in admissions requirements in 2012 prohibiting students with the lowest indicators of preparation from being admitted, the USG enrolled  10,000 freshmen in learning support in 2015.  The USG created a statewide effort to improve outcomes for these students, and this initiative went to scale in the 2015-2016 school year with remarkable success.  For this reason, the emphasis on improving student outcomes in these programs, largely through changes in delivery mode, continues to be a significant priority for the University System’s Complete College Georgia work.

The USG is increasing student success through the provision of more effective and timely learning support. Traditionally, students who needed help in basic math and English skills were required to take non-credit courses before taking courses for credit that counted towards graduation. Students who had to take these courses succeeded at rates much lower than other students.  Now, many USG institutions are working to imbed extra support in credit-bearing classes.   The results have been spectacular. 73% of students receiving added supports in credit bearing, entry-level English and Math classes successfully completed the course.  Previously, when students were required to take non-credit courses to brush up their skills before taking the credited course, only 26% and 36% of math and English students respectively eventually passed the credit course within 2 years. 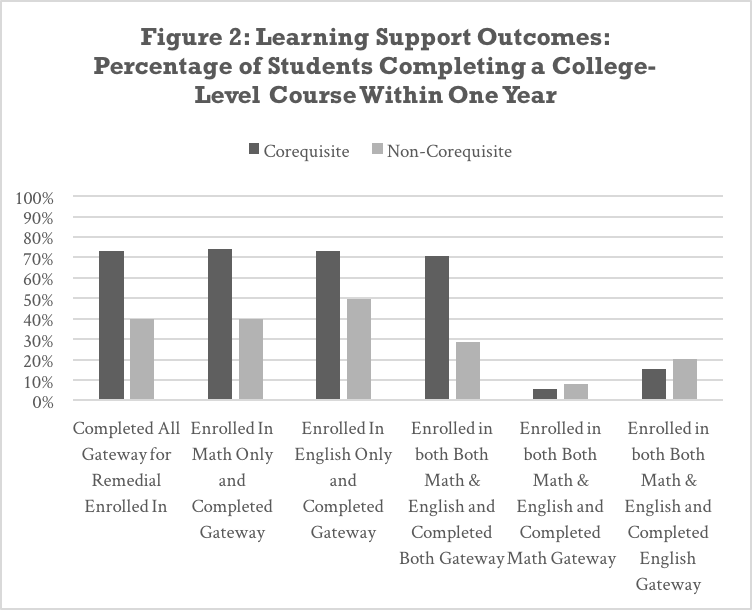 The University System’s mission is to create a more educated Georgia. Census data from 2015 indicate that 38.7 percent of young adults (ages 25-34) and nearly 39.1 percent of all working age adults (age 25-64) possess at least an associate’s degree.  Twenty-one percent of working age Georgians—well over a million—indicate that they have some college, but no degree.  Georgia’s young adult population has educational attainment levels above the national average for associate degrees and higher, but across the working age population, the situation is reversed, with working age Georgians falling behind the national average. See Figure 3. 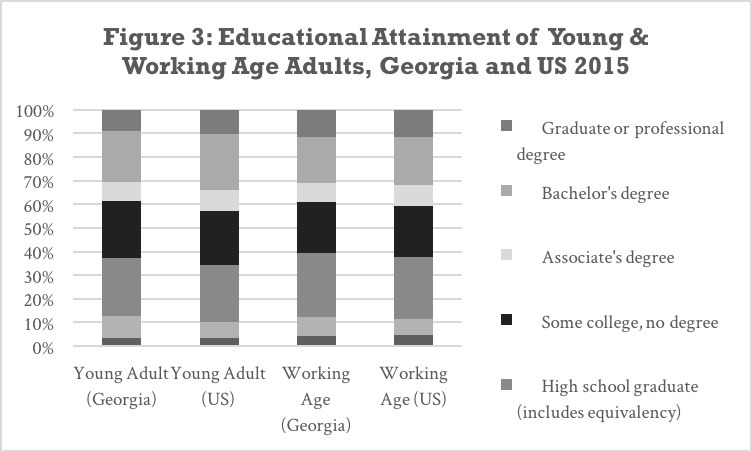 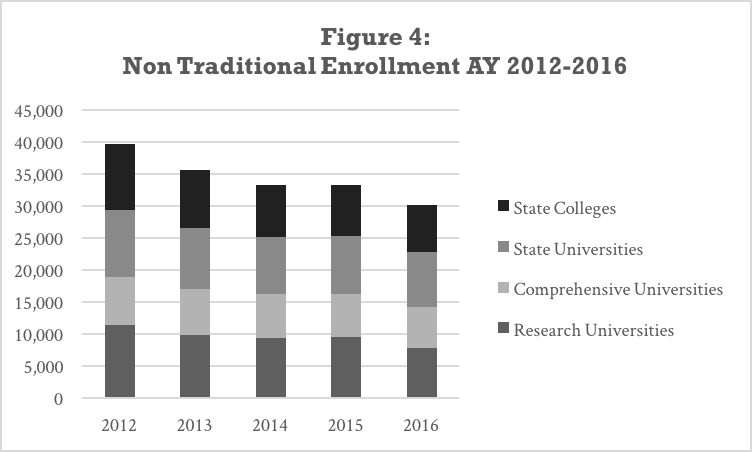 Georgia’s educational attainment rates have improved over the past five years, due in part to degree conferrals at all levels rising by 18 percent since the 2010 Academic Year.  In order to reach the CCG goals for higher education completions by 2025, the state must graduate an additional 3% of students annually, over and above previous years. While the state has been able to exceed its goals for degree production since the announcement of the CCG initiative in 2011-2012, demographic and economic trends underscore the significant work still needed to maintain the state’s momentum. Enrollments, which swelled during the recession, declined as the economy recovered, most especially among non-traditional students.  The shift in enrollment patterns reinforces the importance of student persistence and retention to meeting the state’s overall attainment goals. Figure 5 provides a view of degree production from 2010-2014. 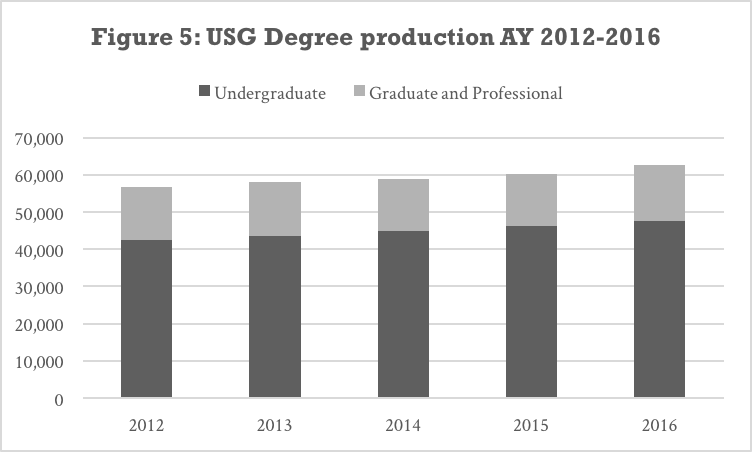 Georgia’s colleges and universities provide a wide range of programs to meet the state’s diverse needs.  CCG has continued to work with institutions to focus on research-based, high-impact strategies that have the potential to improve student outcomes.  Top-level work areas that have been the focus of the System’s CCG activities are:

These top-level strategies have in some instances been further refined to provide more flexibility to serve the range of institutions within the University System.

The overarching goal for Complete College Georgia is to increase the number of undergraduate degrees awarded by USG institutions.  In order to achieve this goal, the USG/CCG has adopted eight strategically-oriented, supporting goals:

Each goal addresses a specific challenge to completion that has been identified through research.  By approaching completion through a set of goals focused on removing specific barriers to success, CCG is advancing a strategy with sufficient flexibility to be effective at every campus in the System and adaptable enough to have impact across the institutional spectrum in Georgia. The success of this flexible approach is evident in the degree and scope of adoption of strategies across the System.

This approach represents a wide range of activities across the System, and underscores a deep commitment to completion work throughout the state.  The variety of goal-oriented strategies offers institutions the opportunity to focus on those activities that match their profile and institutional mission, while not expending limited resources to pursue goals that are not priorities for the institution.   Identification of and use of these common goals have helped to focus the work at the System level on high impact strategies and provided guidance on how to implement various activities at the campus level.

Five years of experimentation and investigation have provided Georgia with some powerful insights into how students succeed, and how they are challenged.  A consistent focus on data has been essential to frame the discussion about who is succeeding and about where more attention is needed.  The ability of institutions to identify and use data to help drive decision-making is unevenly distributed across the USG institutions, with some campuses enjoying robust data analytics systems that help shape student and institutional decisions, while others struggle to identify top-level trends among their populations.  Progress in this area is clear, and the System office has engaged in discussions on multiple levels on how to effectively leverage the assets of higher capacity institutions across the state.

Across the goals that Complete College Georgia pursues, the role of advising as a point of contact between students and the institution has emerged as absolutely critical.  Advising plays a vital role in helping students discover their path to graduation, select the courses that will keep them on that path, and guide them toward their academic and life goals.  Advisors perform a host of functions on campuses across the System, operating in an ever-changing landscape with dynamic expectations and responsibilities. The significance of this institutional function will only increase as campuses focus on strategies to help students increase credit intensity, identify and enter academic focus areas, follow specific program maps, and align their academic pursuits with workforce needs. To improve the success of these activities, an increased focus on professional learning, process objectives, and better access to and use of, technology, have emerged as areas of greatest focus.

Georgia’s institutions have been recognized nationally for their work on a range of innovations, from the use of predictive analytics in fostering student success to taking a statewide approach to addressing the needs of critical, underserved populations.  Recent efforts to alter the way students experience remediation and increase student credit taking have demonstrated significant success in helping students accelerate their college programs. These programs offer tremendous promise to support and accelerate the academic success of all students and help the state reach many students who are currently not well served in higher education.

An emerging challenge across all sectors and regions of the state is the need to close serious equity gaps if we are to reach our completion goals.  Standing in the way of closing these gaps is an unmet need for financial aid among less-resourced students.  Some institutions have attempted to close a portion of this gap through “retention grants” which help students remain enrolled in the face of small amounts of unmet need. Achieving more meaningful advances in college completion will require greater participation of students from economically disadvantaged backgrounds, which will, in turn, place new burdens on institutions’ support structures, create demands for new services, and, most critically, require a commitment to campus need-based aid.

While Georgia’s considerable success in promoting discrete strategies and scaling specific interventions underscore the strengths of operating as a System, the state’s experience also highlights the challenges of simultaneously moving a highly heterogeneous, complex collection of institutions to a coherent focus on student success across a range of measures. Critical to the state’s ongoing work will be the implementation of consistent, measurable campus goals and data reports. Another key lesson learned is that the System needs to go beyond setting policy and actively promote implementation. The goal of improving student achievement while closing equity gaps requires active policy promotion and the creation of an infrastructure that will drive gold-standard implementation of integrated interventions while supporting scale across the System. This strategy builds upon a more sophisticated understanding of what drives student success and a growing commitment at the institution level to take transformative steps to achieve improved student outcomes.  The USG has an opportunity to leverage the work of individual campuses and translate that work to drive transformation on campuses throughout the state.