The state’s 26 public universities and colleges comprise the University System of Georgia (USG), and these institutions represent a student population of more than 340,000. Ranging from open access institutions to highly selective research universities, the USG has completed a three-year transition to the co-requisite model of developmental education in both English and mathematics impacting more than 26,000 student course enrollments. Compared to results from previously used developmental models, the co-requisite approach doubled success rates in freshman mathematics while increasing by 50 percent the success rates in freshman writing. These improvements held true for students at every preparation level and in every demographic segment. This technical brief will present the results of this work in detail, as well as the implementation strategies that were used to move to full scale.

In Fall 2017, the University System of Georgia (USG) began a detailed analysis of the data comparing the eﬀectiveness of three approaches to developmental education that were being used across the system in both English and mathematics. The three approaches were: a traditional developmental sequence; the Foundations model, in which students enroll in a single semester of remediation requiring successful completion prior to enrolling in a college- level course; and the co-requisite model. To compare the eﬀectiveness of these approaches we compared the rates at which students were able to successfully complete a college-level English course, and a college level mathematics course (college algebra, quantitative reasoning, or math modeling) within one academic year.

Because the preparations of incoming student populations across the system vary considerably, we disaggregated the data using common uniform measures of preparation: ACT math/writing sub-scores; SAT math/writing sub-scores; and high school GPA. The results were striking and mirrored results of a similar analysis from the Tennessee Board of Regents (see Denley 2015a, 2015b).

We will discuss both English and mathematics but will begin with mathematics. The results disaggregated by ACT math sub-score are displayed in the figure 1. These data include both students who entered with a standardized test score, and those who did not. Students without a score are included in the “Total” percentage rates. Throughout we will refer to “passing a college level class” as earning at least a “C” grade. 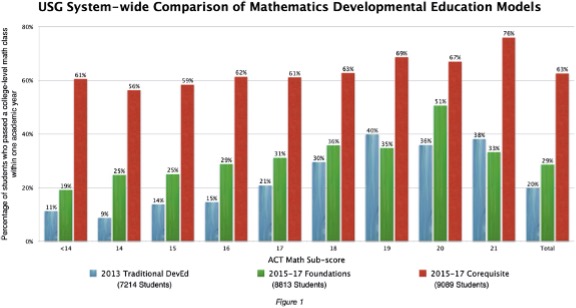 As the chart shows, the students who were educated using the co-requisite model were more than twice as likely to complete a college level class with a grade of “C” or better when compared with their peers who used either of the other two pre-requisite approaches. Indeed, while the success rates more than doubled overall, the gains were not only for the most prepared students. In fact, the largest gains in success rates were experienced by students with the weakest preparation. The data for the other measures of preparation were similarly compelling.

While the improvement in the results for the overall student population were impressive, so, too, was the co-requisite model’s eﬀectiveness in improving success rates for all student sub- populations and in eliminating equity gaps. This is illustrated by the results for African American students who studied mathematics using the three models, as displayed in figure 2. Those students who took a co-requisite mathematics course successfully earned a “C” or better at more than twice the rate compared to their peers who used the foundations or traditional approach. Once again, there were significant improvements in success rates for students at every preparation level with the largest gains for those with the lowest preparation scores. 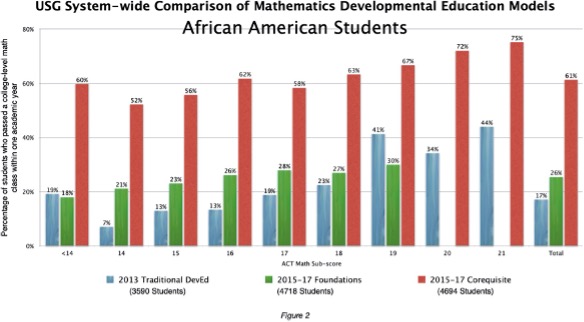 These results are analogous to the improvements achieved by other racial groups and student sub-populations, such as low-income students and adult learners. For each category we saw a doubling in the rates at which students successfully completed a college level mathematics course. Moreover, that doubling holds true for students across the preparation spectrum, whether using ACT, SAT or high school GPA as the measure of preparation.

The analysis for gateway English course success followed a very similar pattern. We show these results in figure 3. Once again, the students who were educated using the co-requisite model were almost twice as likely to earn at least a ‘C’ grade in their college-level math class when compared with their peers who used either of the other two pre-requisite approaches. As with mathematics, the gains in success rates were apparent all across the preparation spectrum, producing very similar success rates, regardless of incoming high-school preparation or student demographic. The data for the other measures of preparation were similarly compelling. 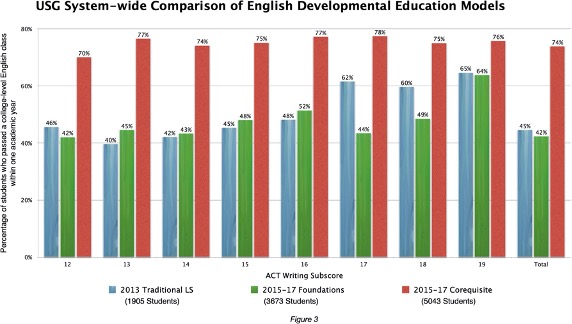 In light of these results, all 26 University System of Georgia universities and colleges moved entirely to the co-requisite model of development education for college mathematics and English beginning Fall 2018.

While there are a variety of ways to implement the co-requisite model, we chose a scaling approach that followed three design principles:

Within these design parameters, institutions were free to make decisions concerning more granular aspects of the structure of their co-requisite implementation, such as composition of the student body in the credit bearing class, whether the same instructor or diﬀerent instructors taught the two instructional experiences, and the number of credit hours in the co-requisite class.

By analyzing the full implementation for academic years 2018-19 and 2019-20 we have been able to shed some light on which more granular combinations of strategies produce better results. That analysis will be provided in a later technical report (Denley 2021). For the purposes of this technical brief, we will concentrate on providing the results of the two full academic years of full co-requisite implementation in mathematics and English courses and comparing them to the results from the three-fold comparison that led to moving to full scale. These results are shown in figures 4 and 5. 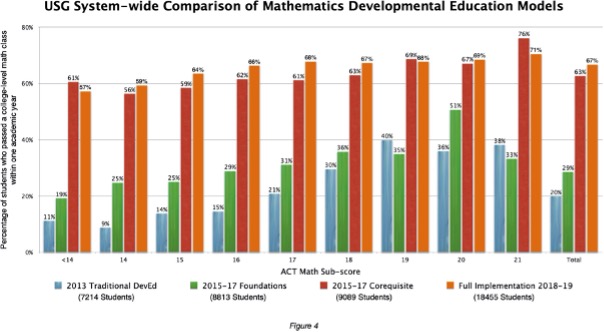 The success results for the full scale implementation closely mirrored those that we had seen in the earlier smaller scale trials of the co-requisite model. In mathematics, the success rate of 67 percent slightly exceeded the overall co-requisite success rate in the previous three years and more than doubled the best outcomes from either of the other two approaches. In English, the pattern was much the same. The overall success rate of 69 percent was not quite as strong as the 74 percent of the previous three years partial implementation, but was still a very substantial increase over either of the other two approaches. 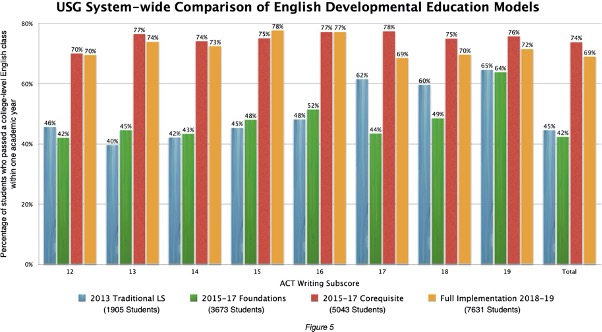 There has been considerable interest in which students might benefit from the co-requisite approach and whether an implementation should employ some preparation floor score (National Academy of Sciences 2019). Our results do not suggest that any such placement restrictions are required. Our results show very similar success results for students in Freshman Writing regardless of incoming preparation. Mathematics shows a very similar pattern with similarly strong passing rates across the preparation spectrum. In mathematics the passing rates for those student who arrive most weakly prepared are not quite as strong as their better prepared colleagues, but even the lowest success rate of 57 percent (for students with ACT math scores below 14) is still twice the overall success rate for the foundations approach, and almost three times the traditional approach. In English, even the least prepared students are passing their credit-bearing class at a success rate in the 70s. Indeed the improvements that we achieved by fully implementing the co-requisite model were statistically significant at 99 percent confidence over the previous models at every level of preparation. 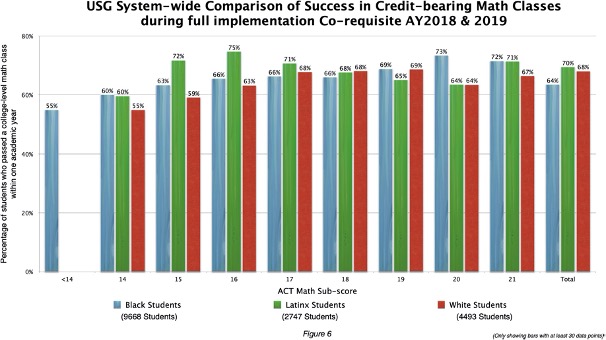 We see the same striking improvements we saw with the earlier analysis when we further disaggregate the full implementation results by race. The disaggregation analysis was carried out for all IPEDS ethnicity classifications. Figures 6 and 7 show this disaggregation for Black, Hispanic/Latino and White students for English and mathematics co-requisite students during the full implementation phase, since these are the largest racial groups among the USG student population.

While at each preparation level there is some variation between the success rates of students of diﬀering races, the diﬀerences are almost never close to statistically significant. That said, there remains a statistically significant diﬀerence between the the overall success rates for Black students when compared with their White and Hispanic/Latino colleagues. This total success rate incorporates the data from those students with standardized scores, as well as those without scores. 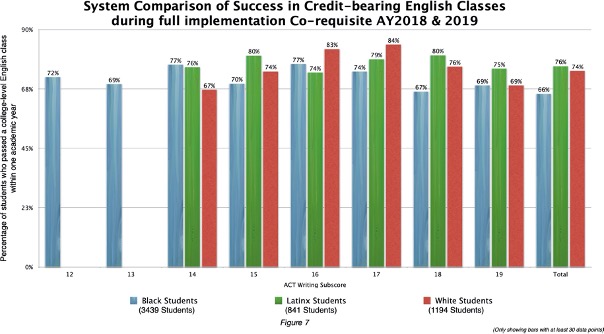 As we mentioned earlier, institutions were free to choose a variety of implementation strategies within the required co-requisite implementation framework. Some of these strategy combinations were more beneficial than others, but this was certainly information that was not available at the time of design or implementation. We will discuss these findings in more detail in a subsequent technical brief, but there is evidence that Black students were disproportionately represented in the student populations with the less beneficial strategy combinations. Much of this overall diﬀerence in success rate can be attributed to these diﬀerences in underlying strategy-combination eﬀectiveness. Work is underway to move institutional co-requisite approaches to to the more beneficial strategy combinations to further eliminate outcome diﬀerences between student groups.

Outcomes for Black students have increased less than the success rates for their colleagues of other races. Other ongoing work within the USG is exploring the underlying reasons for this and implementation strategies to eliminate those eﬀects. These other avenues of investigation include a variety of academic mindset aspects, both from the student and faculty perspective, as well as more granular aspects of styles of pedagogy and the structure of classroom instruction. The findings from this world will be discussed in later technical briefs.

2. Denley, T., (2015b) Co-requisite Full Implementation, Tennessee Board of Regents Technical Brief No.3